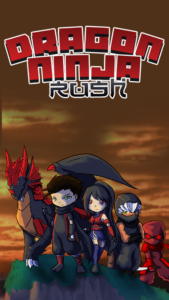 You might have seen the movies about the ninja and thriller moves. Indeed, there are several mythical stories that surround the ninja clan. The Dragon Ninja Rush is based on the legendary and mythical story of the Dragon Ninja Clan. It surrounds the king and queen of the ninja clan. The players get a ninja and can train in ninja skills in this game. You can race with your ninja as well and have control even when you face different challenges and environments.

The game centers on training to gain ninja skills and how to become a ninja master. You are put to the task of racing with your ninja and as you face different environments you will collect gems and gold coins. You will be running, sliding, scrambling, dodging, and dashing against others in this game. There are numerous missions that are fun and fast paced. The ultimate aim of the game is becoming a Ninja Champion. You will be racing and going through different levels as you try to reach the top of the league. There would be several challenges faced by a player as well as rewards to reap when a player clears certain hurdles.

Challenges in the game

The game offers varying levels of obstacles as one race to become a Ninja champion. One would have to figure out the ways to jump, slide and run through different obstacles. There are booby traps galore such as walls, holes and spiky bamboo poles. There might be red bulls lurking around as well as shurikens which are deadly. Among free games it is definitely worth looking at. Those who love ninja games will surely love this game as well.

Among the free games that are available online and through Google Playstore, this game promises a lot of fast paced action as well as wonderful graphics to attract the players. There are powerful magnets, rainbow bridges, magic wands, flying rockets and shields to use and experience in this game. There are pets and animals as well as who strengthen the skills of the players. Even if it is categorized in fighting games you will surely find the game to be fun and with wonderful graphics.

What to aim for?

This ninja game might be among sonic games available and players need to be stealthy, fast and strong in order to be successful in playing it. Every player needs to aim to collect pets and animals which strengthen their skills. With a collection of gems and gold players will be able to upgrade their ninja skills. Here are some key ways to play the game:

It is also possible to build one’s own ninja character. With so many interesting features it promises to be one of the most addicting games for playing which players will love to download.