Penguin Run Saga, Cartoon From Universal Games, Addicting As Ever 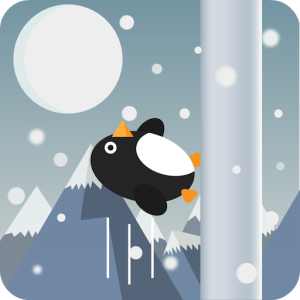 If you like playing with cute creatures like penguins and chickens, this game is a similar racing game modeled on the Arctic penguins that put a lot of effort every day to collect their food. Thus, the game is not just a memoir of their hardships, but also one of the entertaining addicting games that teach you something at the end, just like the moral of the story or in this context moral of the game. This could be one of the games for girls or equally perfect for little kids in order to distract them for other stuffs and keep them busy when you find it necessary such as during a long drive to a resort.

What Is The Game About?

It is as easy as two steps, that is, tap and flap where the ultimate test is against time and how fast your reflexes are. In the case of kids this is a good activity to build and improve their reflexes. Thus, it helps in early mental development of a kid. So basically you have to tap in order to change your flapping direction and then move forward to collect fishes, just like other penguin games, but this one has been made really simple and engaging with lots of improvements. You have to be aware of snow balls and ice cones which are obstacles that must be avoided. This is the rule of the game. In order to collect points you need to catch more and more fishes, which in return also unlocks more penguins.

Thus, you keep climbing the leader board and can also challenge other top players on it. Your scores can be shared on social networks with your friends and additionally invite them to play and compete with you.

Penguin Run Saga, Cartoon version is one of the free games that are liked by a lot of people including kids. This is a really time pass alternative where you don’t have to think a lot and find some relaxation while playing a simple game. You can download the official version release of this game from Universal Games at https://play.google.com/store/apps/details?id=com.cartoon.penguin.run hosted at the Google Play Store. The list of additions includes the following.

So, this game is fun for girls, young kids as well as for adults looking for some hassle free entertainment games. You don’t have to stress over any compatibility or out of memory issues either.