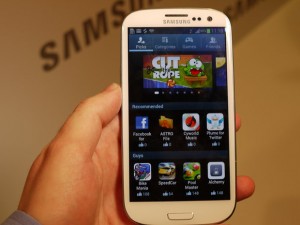 The Samsung Galaxy S3 is one of the forerunners in the smartphone industry. It has been one of the most impressive flagship smartphones from Samsung. It has been altered in a way that only the best parts and specs are compacted into one single smartphone. If you think of the smartest smartphone out there, it should be the Samsung Galaxy S3. Out of all the Android handsets, the S3 is considered the best of them all. It has been compared to the iPhone 5 but it still could not surpass the S3’s impressive features. Sell your BlackBerry and get the S3 because it does not take a genius to know the difference.

One of the reasons smartphones probably became intelligent was their apps. It works like your personal computer. However, considering that there are thousands of apps available on Google Play and the Android Market, which of these will you choose? Here’s a guide to what apps you can download for a better S3 experience:

The child in you will certainly come out of its shell. This favorite chilled out Android game will promise to give you an exciting organism-absorbing action. The 4.8-inch screen the S3 has will be an amplifying experience for the game. You don’t need to congest your fun just because of a small screen, right?

The Galaxy S3 is sophisticated and finessed to perfection. However, deep inside it is the geekiness that only some recognize because it can handle games such as Minecraft. There are 36 different kinds of blocks for you to build anything you want. You may choose between Creative and Survival modes, depending on how your mood tells you. This game can be a good reason to sell old BlackBerrys. It just keeps your imagination alive.

I’m sure you have played Angry Birds. The birds are being catapulted to the air and hit all the pigs on the field, protected by wood, ice, or stones. However, the conflict between these two animals has been raised to a whole new world. They decided the war was intergalactic. Gravity is everything for these birds. Manipulate the gravity that controls the celestial body and hit the pigs with accuracy. This will be enjoyable especially with S3’s fast processors.

Spotify for Android has just all the complete package with ICS support, an improved design, and high-resolution snaps of your favorite music. This app will bring your music experience a bit higher. However, if you happen to have a Spotify Premium account, you may cache songs to your multimedia S3 phone for offline listening. Theirs is even an ‘extreme’ sound quality for better acoustics. Who would not be impressed by such a beautiful app?

Are you the movie or TV buff? With your Samsung Galaxy S3, you don’t need to trade in BlackBerrys and buy an impressive remote. Let your Samsung do its magic by downloading the Samsung Remote app. Everything essential in the remote is covered. So, you just have to sit and watch your beloved Blu-Ray movie while holding your S3.

I love Osmos HD out of all the apps here.

Hey thanks for recommending these apps! I just recently got my hands on a new S3, so I'll definitely have to give all of these apps a try. For the few months I have had the phone I have picked up one cool app already called DISH Remote Access. One of the gals I work with at DISH got me a Sling Adapter a few months ago, so I use the app now on my new phone to watch all of my favorite shows from home, live or from off my DVR, everywhere I go I the world. I do tend to travel a lot for business through the years too, so it's definitely nice to have as a TV junkie when I'm half way across the country and all of my favorite shows are premiering. It also doesn't hurt that the S3 makes the video look absolutely amazing! :)