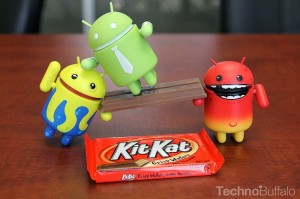 The launch of any and every Android version is highly awaited as it provides the users of smart phone with different features and applications. In fact the phone manufacturing companies also eagerly await the launch of a new Android version as it allows them to upgrade their existing line of smart phones. The recently launched Android 4.4 KitKat is creating quite a stir amongst the users as well as the phone manufacturers.

Presently this updated version of Android is found only on Nexus devices. But don’t get sad if you are not a Nexus user as the other companies are already in line to sync their phones with this latest version of Android. However in the meantime let’s quickly check out the different features os this version.

#Enhanced Visuals: this updated version of Android allows you the use the entire interface when you are playing games without any symbols of battery icons or notification bars. Can you imagine the fun of playing games on a full screen? The whole time you are playing the game the user interface will remain hidden. But this does not mean that you need to close all the different applications when you want to switch to the UI. In this version you can access it in the immersive mode while the phone is in full version.

#Sensors: android has upgraded the sensing capability of the touch screen as a result it takes low battery power to switch from one tab to another. Until and unless it receives the forward sensor events in batches the processor will not operate. Now how cool is that?

#Performance: It seems this version has been launched with performance as its key attribute. No matter how many years back you bought your smart phone you can easily install this version as long as it has 512 MB RAM. In fact they have upgraded the version in such a way that each and every component will take very little space to get stored. And in addition to all this KitKat is making sure that the developers can easily create energy saving apps for your phone. Power packed performance, isn’t it?

#multitasking at Super Speed: as far as multi tasking is concerned, android is second to none. And in this version they have taken it to the next level. The super sensitive touch screen ensures that one can multi task between the different apps in a jiffy. And when it comes to the user experience, this is what that actually matters.

In addition to all this the latest version of Android has many other apps that you can use. Some of the popular ones are “OK Google”, Screen Recording, and Smart Caller ID to name a few. In short it is an excellent version that is sure to take your experience as a user to several notches higher.

If you are a Nexus user then you must be thrilled to use this version. And if not you have got two options. Either you buy a Nexus device or wait for your smart phone company to upgrade to this version. Whatever you do, don’t miss out on it!
Guest Author Mrs.Francisca Straut is a blogger. Blogging is her passion. She loves to write techonology related article and share in the web. She also writes for corporate video production companies.