Share
Tweet
You are here: Home › Android › Samsung is Scaling Back Big With the Galaxy S3 Mini

Samsung is Scaling Back Big With the Galaxy S3 Mini 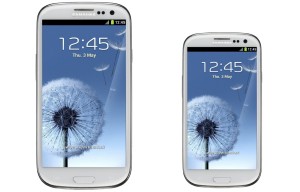 Today marks the release of Samsung’s much talked-about Galaxy S3 Mini phone, which serves as the smaller scale Galaxy S3 that was released before summer this year. The reactions toward the specifications of the phone have been pretty mixed, not because of its smaller size, but of the features that they decided to leave out. Don’t immediately assume that you’ll be sacrificing a lot by going with the Mini if you want it, but do consider the other options of Samsung before you jump on this.

Let’s get the Apple comparisons out of the way first. For one, it’s really nothing like the iPhone 5 at all. If Samsung thinks that they are going to be able to compete with Apple’s new phone, then they probably have a whole new thing coming. Unlike the original Galaxy S3, the Galaxy Mini does not have 4G LTE capability.

There is also no dual core processor, and the camera is five mega pixel. Compare this to the dual core processor in the original, plus the eight pixel camera that was in there as well. Other than that, the Galaxy S3 Mini is pretty much the exact same device as its bigger sibling in terms of appearance, but how much bigger is it actually? Only 4/5ths of an inch smaller from 4.8 inches to four.

The phone will run off of Android’s latest OS version, Jelly Bean. Also, the four inch display will be WVGA Super AMOLEd.

Since it was an international release today, nothing is really known about the official pricing just yet. There has been a suggested listing price of $520, which is obviously a step down from the average original Samsung Galaxy S3 price of $580.

If they want to compete with the iPhone 5 (which is just mere speculation) then it is completely necessary to go below the $600 range, which better be the case given what this phone offers. But really, maybe the basic market is exactly what Samsung had in mind for designing this phone.

Some people simply don’t ask for much out of their phone compared to the hardcore geeks. If they are okay with the absences in comparison to the original Galaxy S3, then Samsung might be in for bigger success than one might think. This is not to say that the Mini is void of a lot of excellent features, because that simply is not the case. But with Apple’s heavy influence over the market, its a matter of differentiation and reasonability that will have to set it apart.

Guest Author – Kevin Abrahms is a content writer and tech reviewer who is based out of New Jersey. He keeps track of the latest in Android, Windows and basically anything else that isn’t Apple.