Common Problems You Can Face With Your iPhone 5 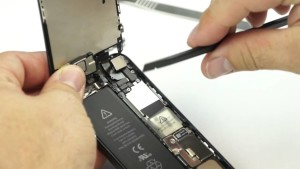 Is your iPhone 5 out of guarantee now? Are you having problems in your iPhone now? Are you worried about how to fix it? There is nothing to think so much about it. Every gadget is a working machine which can get problems anytime. And the good thing is that you can easily fix all sorts of problems with the help of right parts, tools, instructions and as well as the determination.

Here are some tips which will help you in repairing your iPhone 5 and will make sure that the work is done in a right way.

For repairing it, you will need suction cup to pull out the smashed display screen out and attached cables to expose from it. Secondly, you will need the iPhone 5 digital and LCD replacement tool. Thirdly, the five point screw driver which will help you to remove the security screws which are on the sides of lighting connector port. Fourthly, the spudger tool which helps in the prying all the cables of the logic board. Fifth is the screwdriver which will help you in the removing the 3 screws holing the digitizer and LCD. Razor blade is another tool in the iPhone 5 Repair Kits which is used in second method of removing the smashed screen in case the first method fails.