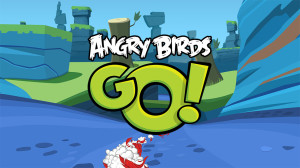 It is more than clear that Rovio still hasn’t gotten bored with releasing Angry Birds games in the universe.

Just in time for the holiday season, Rovio will release a new Angry Birds signature game, this time in a race against time. The game promises a radical change from previous versions, and perhaps the beginning of a new series of games.Angry Birds Go! is a game similar to Mario Kart, which will be released on December 11th, and will put all your favorite characters a midst a colorful racing arcade. The tools used are all karts and the direction in which everything runs is from a mountain top to its bottom.

Due to the fact that more recent Finnish games are no longer limited to a “safe” experience, the partnership with Hasbro will prove very useful once again. After they created Telepods to introduce new characters in the newest game, Angry Birds Star Wars 2, it seems that new Telepods will enhance the experience of Angry Birds Go! by introducing new karts.

On the Rovio website, the developers announced that with this new game we will see the “first-ever 3D Angry Birds World”, plus a lot of awesome special powers. The many game mods, Race, Time Boom, Fruit Splat, Champion Chase and Mega Match, will respond to the needs of all players, from the most inexperienced ones to those who really want to get their competitive spirit going.

Until the official launch of the game, you can browse the website especially created for the new game and form an impression of it. Given the speed with which Rovio releases Angry Birds games and the fact that it has been called one of the most addictive games ever, we are curious if someday they will reach a point of brand dilution – the phenomenon through which no one is interested in such creations. Do you play Angry Birds?

If Angry Birds Go will not ensure the revenue that the company expects, the film adaptation, whose premiere is expected in the summer of 2016, will probably do the trick.

The project officially entered the production phase, under the careful guidance of John Cohen, who in the past produced the famous Despicable Me animation film. The movie will be a computer generated 3D animation. The executive producer of the film will be David Maisel, a former CEO of Marvel Studios.

The Andry Birds game series is one of the most popular and probably one of the most profitable on the market today. Different versions of the game created by the company Rovio are available on almost all mobile platforms and even dedicated games consoles such as the Xbox 360.