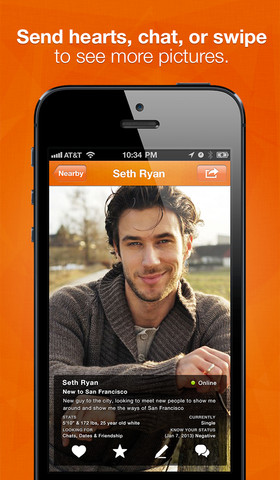 Gay dating apps are big business. For 2.5% of the population to be several of the top grossing smart phone apps is impressive. Gay apps out gross okcupid, eHarmony, Whatsapp, Badoo, and LINE.

Grindr is the most famous of the apps and the first, but it is the dinosaur these days. One thing all these apps in common is that they let you meet new people. I took a look at several of the recent new apps, like GuySpy and VGL, and the standards like Scruff, Hornet, and the all time standby Grindr. I tried to be objective in my review…this is a bit tough when you have smiling faces and hot bodies saying hello or not saying hello! Grindr is the simplest, it just shows you guys around you, sorted in a grid by nearest men. It shows Ralph is 400 feet away, but I definitely don’t want to meet Ralph, I am tall, white, and his no Asians comment in his profile is a big turn off, gross. This is common on some of the apps, to have people with obnoxious profiles. This isn’t too different from real world. A few bad guys out and about at any bar but you never know who is going to be Mr Charming, so we keep looking. Grindr isn’t all bad, but of the apps out there, this one is really just a modern day craigslist, (hookup central). I doubt that Grindr can shake that image of themselves….maybe that is a good niche to be in even. Another similar app with more robust features was VGL. However, by far, this app definitely has a douche bag feel. All the hot guys appear on a page called hotlist, and you can only contact them by paying. The profiles in the nearby section are fakes. It doesn’t have some great features, like the way you can browse profiles. Two other apps stand out.

Scruff is an app for bears. While not a bear, if I was, this would be a great app. It has many features I like, multiple pictures, events and plenty of fish in the sea. However, the more I use it, the less of the sub-culture feel it had when it first started. It feels a little bit like Grindr, but definitely better than other gay apps like GuySpy or VGL.

Meanwhile, my favorite was Hornet. Hornet is kind of a mix between Grindr and facebook. I keep using this app the most and find myself chatting up my “online” friends before bed. It has numerous profile pictures and you can send additional pictures in chat. It lets you explore other regions or other parts of the city using a travel tab, so you’re not stuck with the same old people like on Grindr. Most of all, I just like the way conversations start. People actually have a picture of their face on this app. I can chat about anything, from work, my job search, what underwear makes me look the best (yes seriously) and they have a feature that reminds me to get HIV tested regularly. It is called Know Your Status (KYS). You put in the date of your last test and it reminds you in six months to get tested again. Occasionally, I still log into Grindr always seeing if there is someone new or if I am in a new town. But, I spend the most time on Hornet. The layout is as beautiful as the men. Enjoy!

All these apps work on iPhone and Android. You can get Hornet in the itunes store https://itunes.apple.com/us/app/hornet-gay-social-network/id462678375?mt=8 and on Android https://play.google.com/store/apps/details?id=com.hornet.android