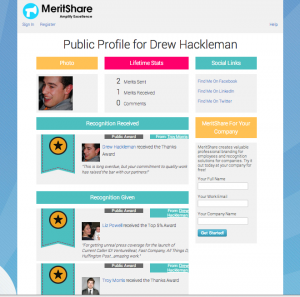 Many employees have grown up in a “Facebook-Twitter-Instagram world” where immediate feedback is available.  Millennials now make up a third of the workforce and will be over 50% in the next 10 years.

In response to these changes, we are starting to see the emergence of employee recognition software like MeritShare which are grounded in social media principles.  MeritShare provides an online recognition service using peer-recognition, a service that allows anyone at a company to recognize and thank co-workers with kudos, achievement and awards.

We are starting to see employees take more matters into their own hands.  Didn’t we ask them to think and act like owners?   This trend called by some as “the consumerization of IT”.  I call it democracy in cubeland. People are choosing and using their own mobile devices for work, picking the online software they want, and now they are taking recognition into their own hands.   One employee who asked to be anonymous said  “To me getting recognition from a co-worker I respect is better than kudos from a manager I don’t”.   Ouch.

Meritshare also allows both the grantor and receiver of the award the option to share on social media and features a Linkedin integration.   I tried it and gave a little love on Linkedin to someone I work with that has saved me many times.  Marketing executive and professional branding consultant Austin Grant says “ it’s a great way to give recognition and stay top of mind with the people you are recognizing with everyone in your network watching”.

MeritShare claims it is the only employee recognition software to provide a public profile page for recipients that can be used to build their online reputation, as referenced in a recent Mashable article.  I did some online searches that produced relative results like Klout for your social media score and Linkedin for your work history.

How much do you have to pay for good work karma?  MeritShare is free for individuals and has a premium tier with advanced features for companies.   A company spokesperson says “MeritShare costs less than what a company pays for coffee”.  I tried to convince them they should give it away for free and put it in advertising.  Let’s just say I was politely rejected.

There is no friction, it’s real-time, online – and we shouldn’t expect anything less.

I give it 4.5 out of 5 stars for usability, simplicity, and effectiveness.  My only criticism is that I wanted more award options to chose from.  Warning: some older folks and lurkers may be turned off by the public sharing and social media integration, but isn’t that the point?  Someone once tweeted “unexpressed gratitude is like a gift wrapped, but never given”.