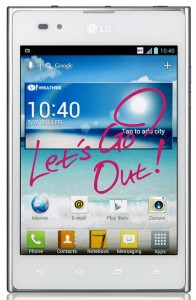 It’s a smartphone…it’s a tablet…no, it’s a phablet!  The Dell Streak released in 2010 perhaps owns the title of being the first phablet to hit the consumer market. The term “phablet” refers to any device with larger touchscreens of 5 inches and above. It is also distinguished by its use of a stylus pen. The idea of a phablet is for you to enjoy the best of both smartphones and tablets, eliminating the need for other devices.

The Samsung Galaxy Note, which put the phablet into the mainstream market, is perhaps the phablet to beat at present.  With the Note’s success comes a new phablet player in the market, the LG Optimus Vu, which was announced at the Mobile World Congress back in February.  Rumors have it that that this direct competitor to the Galaxy Note will don the Verizon logo and will be released this September as of this writing. The question is, is it worth it?

Processor and OS – Vu runs on Qualcomm’s powerful 1.5 Ghz dual-core processor and has Android Gingerbread 2.3. LG has also promised an upgrade to Android Ice Cream Sandwich in the future.

Memory – One attractive feature of the Vu is its 1GB RAM and 32GB internal memory, which will surely be enough if you’re planning to use apps like Evernote, RingCentral, Dropbox, Photoshop Express, and others.

Camera – Whether you’re photo-crazy or VoIP service crazy, the LG Optimus Vu will suffice for your picture-taking or video-calling needs.  The phablet has an 8-megapixel rear camera with LED flash and a 1.3-megapixel shooter on the front.

Still, the Note beats it slightly with its 8MP and LED Flash rear camera along with a 2MP front camera.

All in all, the Vu is easy to bring and write on.  Those who want to use their devices for note-taking, web browsing, and reading may find the 4:3 aspect ratio more practical than widescreen.  However, some balk at the look of the 4:3 and the lower resolution of the Vu. This device also doesn’t seem to be the phablet for the forgetful.  As PCMag noted, you’ll need two separate cases for your stylus and your phablet as there’s no slot on the Vu to put the stylus in.  Makes you wonder why the designers could forget a simple detail like that, which could be a deal-breaker for some consumers. The biggest turn-off for me is the price of around $900 for an unlocked device (it was released in Korea with a price tag of 990,000 won, according to Engadget), which doesn’t seem worth it for a device running on Android 2.3. Some would most likely just wait for the release of the Samsung Galaxy Note 10.1 and Galaxy Note 2.