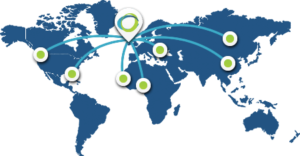 When we talk of content delivery network it is usually about distribution of content over a network. This could comprise of web servers that are distributed over a large geographical area. The aim of such a network is to ensure that content is efficiently delivered to n number of users. There are certain benefits that such a network provides.

When a content delivery network is used there are several benefits to users.

Due to enhanced security measures the hypertext transfer protocol is standard for most sites that operate on the World Wide Web.  This protocol governs the downloads that come from different web servers on a web browser. For large sites that see a lot of network traffic this protocol can pose certain problems. This is because a single server of HTTP can handle only a few users at the same time after which the server becomes slow or might become unreachable as well. The servers based on HTTP also remain vulnerable to DDoS form of attacks that leads to several requests being sent to a single web server which might be irrelevant and prohibits actual users from being able to access content on a site. Such problems are overcome by the best CDN network. That is because such a network will rely on multiple servers that are based in different locations. Each site has a copy of the content of the site. This also makes DDoS attacks more difficult as a CDN helps to overcome such a problem by offering particular content from different servers. The data reaches the user as per the location of the server that is closest to the user.

Nowadays we are able to stream rich media content and large files effortlessly through the internet. This is possible to a large extent due to the CDN services on offer by different service providers. Large corporations can use such services to distribute software and large files smoothly and without any hassles on the part of the customer or end user. Companies that offer streaming media, particularly find the benefits of using such service. This service ensures that end users get access to data from servers that are close to their location. As a result, data flow remains smooth and uninterrupted. As digital distribution is gaining importance in modern times of internet usage, content delivery network services are also becoming essential for such operations.