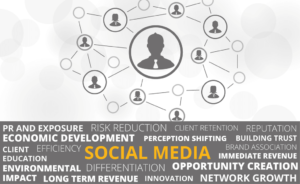 Great, you want to make an app for your company, you want to grow your company and allow your customers and potential target audience to have an application that encompasses everything that makes your company innovative and exciting, as well as giving your customers the simplistic ease of access that apps and their user friendly interfaces give us on a day to day basis – making our ever more demanding life’s relatively more simple.

But before you decide that you want to create your own app to grow your business, you should probably check that you’re not overlooking the very one thing thats already connects 3.14 billion of the people living on the planet; social media.

Of course you’re already aware of it – you may have already used it, maybe to keep in touch with an old school friend, or maybe for increasing your companies growth. Or like many, sharing parts of your life in pictures, expressing your thoughts via status updates, and theres even an exclusive feature to display your current emotions (emoji’s included)!

So now that we have established that social media can be used to portray a digitalized version of ourselves on our personal profiles and contrarily for corporate business marketing,

this begs the question:

Personal use of social media allows us to convey our own personality so why should professional use be any different?

These apps fundamentally allow us to reach out to a demographic made up of 2.307 billion users spread over varying applications. Social media giants like Facebook receive 1.6 billion monthly active Facebook users (MAU’s) which is a 14% increase year over year; and In the U.S 65.8% of companies use Twitter for marketing with a further 74% of users following SMB’s solely to get product updates.

Companies should use these apps to reach their target audience, not on a corporate level, but instead on a personal level; thus conveying the companies own professional personality and subsequently building formidable relationships with their customers.

Spotify, the popular app for digital music streaming are a perfect example of using social media to not only market new content and feature updates, but also deliver a personalized online customer support service via their Twitter page branded “@SpotifyCares”.

Twitter allows its users to directly message companies, public figures and organizations both publicly and privately – this newly found opportunity for personal communication between the customer and client is invaluable in business, and more often than not, it is deemed as more appealing communicating through apps.

In our opinion it is somewhat naive, and more importantly costly to not capitalize in on the potential of already existing social media heavyweights.

The digital world we live in is at a perpetual expansion, its not a question of leaving behind face to face interaction in business; its about accepting the appeal embracing social media as a form of digital marketing and capitalizing on the benefits it can bring to your company – not the deficits.

The only downside? – to never embrace it in the first place.