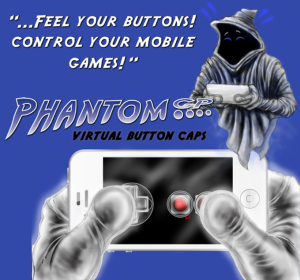 Today’s mobile devices have become so sophisticated that mobile game makers have been able to create titles that are able to compete with those that are available for games consoles. These games are great in terms of graphics and sound, but, there’s one area that they drastically fail in, which is the lack of physical feedback and a feeling of control due to virtual on-screen buttons in lieu of the physical buttons that gamers have become accustomed to over generations of console and portable gaming systems. Mobile devices simply lack the physical outline that our thumbs need in order to tell our brains whether we are hitting or missing these buttons. The newly designed Phantom GP Virtual Button Caps™ will bring an end to this problem, and allow all gamers to have an enhanced gaming experience on all mobile devices in a simple, inexpensive, completely seamless and portable way by allowing them to FEEL where the virtual buttons are on any mobile game.

Ask any gamer why they would prefer a hand held or console device over a mobile phone or tablet, and that person will tell you that it is all about having control. Mobile devices lack this aspect of gaming, mainly because they have no buttons to help gamers fully connect with the game. The newly developed Phantom GP Virtual Button Caps™ are therefore a must for anyone who likes to play games on their mobile devices. They are currently being funded via the crowdfunding platform Kickstarter.

Phantom GP Virtual Button Caps™ are designed so that the center of each circular or cross-shaped cap is raised. This means that not only can gamers feel where the buttons are, but they can also feel the up, down, left, right and center for each button for even more gaming control and feedback response. This aspect immensely enhances the gaming experience. These caps are translucent 5mm vinyl adhesive markers that are removable and repositionable. They have been especially designed to be positioned over the many sizes of virtual buttons founds in almost every mobile game available on the market today. Phantom GP Virtual Button Caps™ have been formulated with a special adhesive that remains strong enough to adhere to mobile device screens, yet can easily be removed and re-applied without leaving any residue. Depending on the size and frequency of application/re-application, these caps will endure approximately 20-50 hours of gameplay before having to be replaced.