The Next Generation in Dating Technology 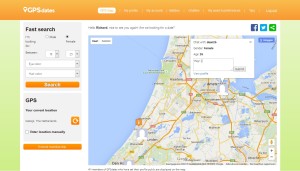 Ever since the creation of the internet, online dating sites have been popular. These days, there’s one for every type of person and every type of interest. It’s very easy to connect with other people all over the world but what about the people around you? What if your perfect partner was living down the street or just a few blocks away? How could you ever hope to find each other amongst all of the different websites and online dating profiles out there?

Now there’s a new technological innovation that will help you do just that. Called GPSdates, it is the world’s first dating app with a GPS map. On GPSdates, users can meet each other wherever they are. Whether at home, at the beach, hanging out at Starbucks, or anywhere else, they can discover the single people around them. If they’re interested, they can click on a profile to view it and chat. They can also filter profiles based on gender, age, hair color, and eye color.

GPSdates was developed in 2014 by a Dutch team headed by father and son Alex and Richard Helsdingen. They have launched a project on Kickstarter to translate the website into different languages, including French, Spanish, and Chinese. They also plan to create an app for iOS and Android with the same features as the website. If successful, they hope to launch the apps in February of 2016, giving people all around the world some help in finding their perfect match.

You can check the Kickstarter out at https://www.kickstarter.com/projects/richardh/gpsdates-the-worlds-first-datingapp-with-gps-map.