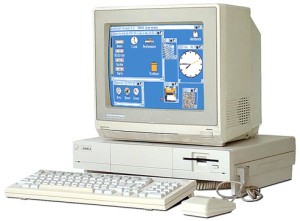 Some ancient computer geeks like myself wonder sometimes why some very promising platform project end in garbage. Amiga platform was one of my favorites to make it yet it failed miserably at the end.

When A500 id badge model debuted in 1987 I was shocked. It felt 10 years ahead of the game at the very competitive price. Having 32bit processor even though the data bus was only 16-bit and address bus was 24-bit in a under $1000 computer in 1987 was a steal. It was able to address 16MB of RAM just when Bill Gates was wondering why would you ever need more than 640KB. Graphics was also stunning for the times, 704×484 resolution in 16 colors was way ahead of the game. On the top of that integrated sound was pretty impressive too, 4 actual hardware independent 8-bit sound channel with separately controlled volume offered more than what any other competitor had integrated on the board to date.

Product was so amazing that it won Consumer Electronic Show in January 1987 and by the time is started to ship in October that year the price went up from announced $600 to $700 yet the computer still secured a great commercial success. Over 3 million pieces have been sold, predominantly in Europe with Germany and United Kingdom as distinguished leaders. Initial success however could have been a first indication of the ultimate failure.

Very rich resources of the system have been mercilessly used by the gaming industry which created very strong and profitable niche on one hand but started to pigeonhole the computer as a gaming console on the other. With the unique at time set of capabilities Commodore, the system manufacturer failed to promote platform as product that reaches beyond gaming purpose. It found surprisingly wide use in special effects edition, sound editing and TV production but that was yet another niche during times when Windows based Intel systems started to secure its position as multi use home computers despite the fact that their entertainment capacity at the time was close to none.

Once A500 was retired things have gotten only worse. A500+, 600, 1200 and 400 all lacked backwards compatibility with the popular older brother. Without heavy hardware to price advantage over the competition that A500 had all new models failed to repeat the success. Other game consoles eaten up the market, personal computer segment was also taken and video effects industry wasn’t enough to sustain sales figures needed for Commodore to keep running the shop.

Funny enough Commodore right before its collapse launched an IBM PC clone with Intel 486 processor on board which also failed to make it on the market. Amiga series became a victim of their own success which came very early and spoiled the management. Innovation initiative has been but at the same time sales expectations kept growing leading to a disaster.