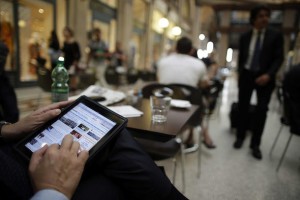 You will be surprised by the lightness of the iPad mini and the grip of the iPad. The iPad mini is indeed small as it only weighs about half of its bigger brother. The resolution of 1024 x 768, which is nice and the screen looks wider than 7.9 inches, thanks to the smoothness of the frame on the sides. Regarding the use of apps, they are considered fast, smooth and overall a pleasant experience.

The size of the iPad mini is larger than competing models, but is incredibly thin and lightweight in design. While the build quality is excellent and widely considered above competitive machines, there is a feeling that compared to the Nexus 7 Fire HD it feels like a toy.

The screen is very accurate

The screen is considered incredibly accurate, and despite a lower resolution than the iPad third and fourth generation, the screen seems slimmer than its actual size. The processor is lower than that of the iPad 3 and 4, but does not seem to show any penalty when apps are tested.

The grip and feel of the device is above average

The iPad mini excels on the device finish and the grip and feel of the device. It is both cheap enough to allow many people to buy it, and allowing them to not be tempted by competing products.

Apple is launching into a new niche

The Kindle Fire Amazon and Google Nexus 7 have captured part of the tablet market, entry-level, proving that there is demand for tablets and handheld forcing Apple to launch a niche that had hitherto avoided or snubbed.

Amazon sold more than one million Kindle per week in December 2011, paving the way for others such as Google and Nexus 7 to try to beat the giant Apple in a market that has established itself two years ago with the launch of the first iPad. Since then, Amazon has launched its Kindle Fire HD; the product sells best on all of its distribution networks.

How many iPads have sold so far?

Apple has sold more than 84 million tablets to date and in the third quarter, the iPad accounted for 26% of its turnover. Everything depends on the evolution of Apple. The gross margin on iPad sales from the United States from October 2010 to March 2012 ranged from 23% to 32%, according to a document from Apple in July. The Wall Street analysts expect that if Apple unveils model such as the iPad mini, which is a little cheaper, that it will crush its competitors, or at least slow their progression.

Compared to the iPad, is the iPad mini any good?

It is a little more like a big phone than it is a small iPad. For this reason it is not a terrible device. Prices are not yet set, but it would seem unfair to charge the same for an iPad mini as they would charge for a full sized iPad. This drop in price is said to be all that is needed in order to wipe out other tablet devices. With the sales of Kindle suddenly dropping down to a very low amount, it may seem that a reasonably priced min iPad will storm the scene and remove a lot of Apples competitors.

My name is Sonia Jackson. I represent the web-site http://www.custom-essay-writing.org. We’ll help you to solve all problems with writing different essays and research papers in a short time; we’ll answer all your questions and give you useful advices.