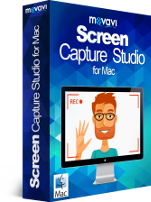 Have you tried to use screen capture software on your Mac in the past only to find that it was either too technical or simply wouldn’t record the footage that you needed properly? Whether you were looking to create your very own video tutorial or simply wanted to grab videos from YouTube or even record Skype calls – screen capture can come in handy, if only it were easier.

Essentially, the Movavi Screen Capture Studio for Mac addresses that perfectly by providing a simple, straightforward and intuitive software that makes recording video footage easy and yet effective. The first thing that you’ll notice when you launch it is the fact that its user interface is designed to be accessible, and in just a few clicks you’ll be able to set the capture region, choose the audio source, select the frame rate, and start recording.

If you want you could even capture keyboard and mouse actions while you’re recording too – by highlighting the mouse cursor or making keystrokes appear on-screen. Needless to say this is especially useful when creating video guides or tutorials, but can be handy for other purposes too.

On top of giving you complete control over your screen capture, the Movavi Screen Capture Studio for Mac also has an in-built editor that will allow you to edit and tweak it after the fact. Using it you can:

Using these features, you can easily transform the video that you captured from something fairly mundane into a professional and attractive looking video. No matter whether it is for personal or business purposes, the Movavi Screen Capture Studio for Mac will let you create polished and great-looking videos.

The icing on the cake however is the extensive selection of presets that come with the Movavi Screen Capture Studio for Mac, and cater to all sorts of devices and platforms. With support for mobile devices as well as online video sharing platforms such as Facebook and YouTube, all you need to do to save and optimize your videos is select the device or platform you intend to use.

Frankly speaking, screen recording for Mac doesn’t get any easier than this and the Movavi Screen Capture Studio for Mac will give you all the tools and features you need to get the job done. More importantly, it won’t force you to go through any sort of learning curve or figure out how to handle the technical side of video recording – and that will definitely save you a ton of work.