iOS gets clever: Now a speaker dock with in-built projector 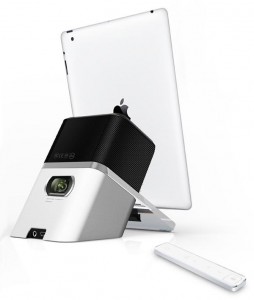 iOS speaker with a built in projector is probably a revolutionary concept in the field. This never before device is the brain child of the blessed designer, Chen Nanyu. As they say, necessity is the mother of invention. So, perhaps the rarity of such a device and its immense need prompted the designer to think differently. Hence, the resultant was this unique gadget. But unfortunately this is still in the concept stage and yet to hit the consumer market.

How did it all start?

iOS, the operating system compatible with iPhone devices emerged for the masses way back in 9th January 2007. Initially the software was not intended to support any third party application. But the growing fan following and the immense multiplication of users and their variegated demands prompted the introduction of iPhone SDK or software development kit. The historic transformation of iPhone OS to iOS in June 2010 was the ultimate revolution that promised to retain the faith and satisfaction of the customers for years to come. Thus, operating under the same Apple license, iOS now thought a little beyond. It imagined creating a comprehensive device that will give the ease of projecting all the applications of entire range of Apple’s iOS devices either on a screen or on the wall as conventional projectors do with spotless audio quality.

Why is it superior

Both functionally and aesthetically, it is a more superior option as compared to the other run of the mill audio devices or the visual projectors.

The most important thing that is worth appreciating about this concept iOS projector is that it gives satisfactory results both for home entertainment as well as business presentations. This is possible by virtue of the advanced high resolution micro projector. While the other sound emitting devices like laptops, cell phones and desktops might render distorted and spotty audio, but this device is supposed to impart a much superior audio quality through its built-in high definition speakers.

The compact structure of this all inclusive device makes it portable and easily transportable. Further, the wide screen of the device takes care of the fact that the user can enjoy the streaming media without any distortion at all. All these can be enjoyed anywhere it is installed.

The aesthetic appeal of this device is equally alluring. Following the footsteps of Apple devices this device has also been given a slim and futuristic design. It is sleek. Monochrome color predominated in the outer surface. Further, a combination of metallic and matte finish gives it a contemporary look unlike the clumsy appearance of the conventional projectors or large scale audio equipments.

It is extremely user friendly too. The 3.5 mm audio jack makes this intelligent iOS speaker dock with built-in projector easily connectable with any audio sources. It also offers micro USB connectivity. For further ease of operation the maker has conceived to create a dedicated wireless remote controller with the device.

As it is still the brainchild of the designer, so there are practically no chances of seeing the device in the stores. But, the promises it makes are high. It is supposed to provide high quality audio and best resolution picture quality by means of the built in projector and the speaker. Eventually, this is arousing immense interest in the consumer market about this iOS speaker dock with built in projector. Let us hold our patience and hope that the device lives up to its claims when it gets launched for the masses.

Guest Author: Alyssa Clarke is a blogger who also happens to be a tech freak. She is always on a look out for tech stuff and is currently hunting for a cool 3D monitor and a gaming mouse.