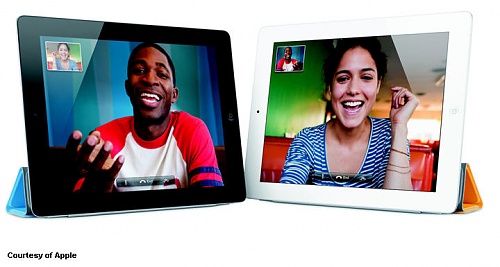 Kudos have to go to Apple for taking the totally dead, and I mean Dodo dead, consumer tablet computing concept and not only breathing new life into it but turning it into an object of desire with the iPad. The new iPad 2 does not feel so aspirational. Sure, there is an increase in the wow factor but not to the degree that you those who have already invested in an iPad will feel compelled to upgrade immediately, and perhaps more importantly convince non-iPad owners to buy into the Apple dream at the expense of the Android one. Which side to take in the tablet wars could be about to become even more problematical with the first of the Android 3.0 Honeycomb devices, the Motorola Xoom, about to hit the shops. You can see our review of the Motorola Xoom here later in the week, but back to the iPad 2 and what the new version brings to the tablet party.

At first glance there’s not a lot to see that is different, but the devil is always in the detail. So while the screen size and resolution stay the same (9.7 inches and 1024×768) if you get your ruler out you will find that the iPad 2 has shrunk down to 186x241x9mm – in other words, rather incredibly, a third slimmer than the original or thinner than an iPhone 4 even. Combine that with the fact that it is now lighter as well, weighing in at 601g, it really does feel more comfortable to hold than before. Whether you prefer the flat back of the iPad 2 or the curves of the original is a personal thing, for me it didn’t make much of a difference in the hand. of course, on a flat surface it sits much more happily now that it has a flat bottom. However, and I fully appreciate I am risking the wrath of hardcore Apple fanatics by saying this: I would have much rather seen improvements to the already excellent screen in the shape of an upgrade to the Retina Display as seen on the iPhone 4 instead of purely cosmetic changes. I appreciate that there is always a cost analysis argument, but surely one balances the other if you were to remove the cosmetic redesign and invest in the screen instead?

But, despite all that and talking of cosmetic changes, one cannot forget the magnetic edge of the new iPad 2 which enables the use of new Smart Covers. I shouldn’t allow myself to be sidetracked by what is, after all, an accessory rather than part of the hardware itself but it’s hard not to be taken in by the cleverness of the $39 add-on ($69 if you want a leather version) which really does enhance the iPAd 2 in a very real, user friendly way. It’s a protective casing, a flip-up stand and even surface mounting device (try sticking your iPad 2 to the refrigerator why don’t you) all in one. Being designed specifically for the iPad 2, and being part of the undeniably inventive Apple design output, the Smart Cover will send the iPad into sleep mode when you close it and wake it up when you open it. Plus, if you want to detach it you can do so in seconds and without fuss courtesy of the magnetic fixings.

Just as the Smart Cover improves the user experience of the iPad 2, so do the performance tweaks under the bonnet of the device itself. Apple has upgraded the processor from a single-core Apple A4 to a dual-core A5 one and there’s now 512MB of DRAM to be played around with. The end result being a doubling of CPU speed and a stunning 9x speedier graphics output (based on Apple figures) resulting in apps loading and running faster than ever before. For me the performance boost is the single most impressive differentiator between the original iPad and the iPad 2. Sadly, it’s also the one area that most consumers are unlikely to take any notice of, not least as they will not have an original iPad for speed comparison purposes. For them, it will be a new experience and so talk of performance boosts will be lost amongst the hype over, of all things, the addition of a couple of pretty pointless (in the scheme of things) cameras.

Let’s be honest, the iPad isn’t really best suited to being used as a camera in the first place although I admit that the ability to take photos or film a quick bit of video footage is a nice option to have for when the urge takes you. Or at least it would be were the cameras in question any good. I’m no expert photographer, but even my distinctly amateur eyes could tell that the photographic results using the iPad 2 were, well, distinctly amateurish. Not only is the form factor of my iPhone 4 much more suited to taking photos, it has a fairly camera look and feel to it after all, but the actual cameras are a whole heap better as well. Apple knows this, making sure to tell anyone who listens that the iPad 2 now comes with a VGA front facing camera and a 720p rear facing one. What the? In fact, make that who the? As in who the heck talks about camera specs like that these days? Everyone and their grandma knows what to expect in terms of photo quality based upon the megapixel rating of the camera taking them. And even grandma knows that you are not going to become David Bailey using a 0.3MP snapper, or even a 0.7MP one for that matter. Erm, yes folks, the front facing camera is only 0.3MP and the rear facing one 0.7MP, seriously. As in, c’mon Apple, seriously? In case you were wondering, the iPhone 4 camera is a seriously respectable 5MP one…

Sure, there is some reasoning to this (other than the cost argument which is also used when faced with complaints about the lack of a Retina Display) and most of it can be summed up as ‘it is all about the video, stoopid’. Indeed, if you look at the cameras purely in terms of video pixel resolution then they sound better at 640×480 and 960×720 respectively. Unfortunately, the real world results still are not great as can be evidenced in the distinctly grainy FaceTime video conference experience you can expect under most indoor lighting conditions. When viewing downloaded high def videos in 1080p via your iPad 2 and a HDMI adaptor to an external HD display the image is great, and you’ve got to love watching the display flip when switch iPad orientation, well I do but then you know what they say about small things pleasing small minds. The video mirroring support enables you to take your iPad 2 into the classroom or boardroom and be interactive on a large HD screen, although the black frame surround can be a little off putting at first you soon get used to it.

The battery life of the iPad 2 seems to have improved rather dramatically, lasting about 25% longer than the original in general use which really is not to be sniffed at when talking about any mobile device. The Apple claims of a 10 hour battery life are not, in all honesty, that wide of the mark. Perhaps most importantly though, the real world battery life of the iPad 2 is far better (like, erm, twice as long) than any of the comparable Android tablets that I’ve got hands on with have managed.

So, is the iPad still the best tablet for the average consumer? The answer has to be a definitive yes. Despite the veritable army of Android devices fighting for a share of the lucrative emerging tablet market, none has managed to really match the form and function of the iPad itself. Is the iPad 2 reason enough to upgrade from the original iPad? The answer has to be no I’m afraid, it feels much more like an iPad 1.5 or a slightly tweaked original than anything with a compelling argument to part with more cash. It’s good, no doubt about that, but the iPad 2 leaves me feeling just a little bit disappointed and wanting so much more. It’s still plenty good enough for an 8/10 as a tablet device, but I was so hoping for a big fat 10. ﻿