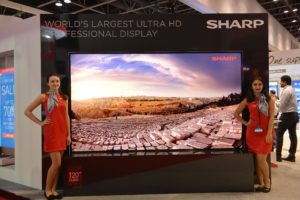 We have all been seeing the high definition television sets becoming larger in dimensions, but Sharp has gone ahead and introduced a dimension that puts it leaps and bounds ahead of others. It is the 120 inch 4K2K ultra HD display, which it unveiled in the Infocomm Gitex Technology week in October 2015. The initial launch has been targeted for the African and Middle East market primarily.

The features it offers

Being launched for the commercial segment mainly, it is an LCD display of 120 inches and of 4K2K ultra HD technology. The PN H-120 specifications for LCD display offer the following features:

First displays at the Sheikh Saeed Hall during the commercial exhibit, it is now being rolled out to the different distribution centers in the Middle East.

Targeted for commercial use

The 4k 120 inch display is targeted for commercial walls. Though television sets and displays have progressed rapidly in technology and every exhibition brings forth new surprises and advances to benefit from, Sharp has definitely put a big step forward in introducing this kind of LCD panel in the market. It has created a big presence in the Las Vegas market and it has been eyeing the African and Middle East market, especially with applications for the commercial segments.

There had been indications that the company was increasing its capability in offering larger displays that did not compromise on quality and sharpness of image. For instance, the 85 inch 8K television set that was launched come with free 3D glasses and that had been a great teaser in its 2014 exhibition campaigns. From that dimension, it has crossed boundaries and launched the 120 inch 4K display panel. This commercial LCD display panel can provide limitless opportunities for promotions in the commercial segment in the following ways:

Interested parties have been inquiring about it, but one can safely imagine that it would certainly cost considerable at this initial time when the technology is new and just launched. However, for those who are looking to make an impression on their audience or customer segment, this might be worth investing in. With the sharpness and brightness it offers, it would definitely help to put a company in the forefront which can harness such technology to promote its business or service. It would make sense for a commercial venture to cash in on this technology at this nascent stage for gaining a competitive branding or promotional advantage.