The Top 5 Technology Websites In Lebanon


Lebanon is one of several emerging countries to fully embrace the internet and mobile technologies and use them to fuel local entrepreneurial endeavors. Indeed, Lebanese love for technology and innovation is so strong that it sparked initiatives like Lebanon for Entrepreneurs, Entrepreneurs Lebanon, among many others. Today, we are talking a closer look at top 5 most influential technology websites in Lebanon. No aspiring entrepreneur or long-term technology enthusiast can afford to miss out on what these influencers and reporters have to say. 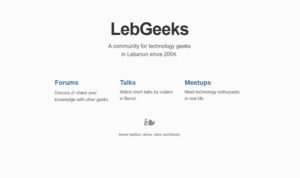 LebGeeks is the largest tech geek community in Lebanon. The site has celebrated its 10th birthday in 2014, and it still continues to be the home for over 3,500 of Lebanese top developers, IT professionals, web designers, gamers, and just about everyone else who loves technology. The website was founded by Samer Nakfour, a designer and engineer whose work and interests span a wide range of fields from programming to interaction design.

In its early days, LebGeeks was just a small forum with only a handful of active users. As technology penetrated lives of ordinary people who couldn’t previously afford to own a computer or a smartphone, LebGeeks was often the first stop to ask for advice, help, or to discuss recent tech news.

These days, LebGeeks hosts a regular series of local meetups and events in Beirut, where users can meet in person, strengthen their friendships, and share their love for technology with others. There’s also a series of short talks given by coders in Beirut, which are a fantastic introduction for every person interested in the subject. 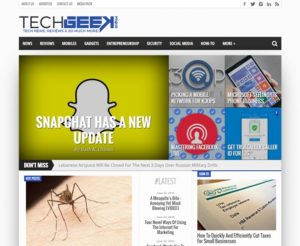 TechGeek365.com is a unique tech blog that focuses on technology, social media, mobiles, gadgets, entrepreneurship, and many other related topics. The site was founded by tech entrepreneur Bashir Osman in mid 2014, and has since gained a lot of traction with the help of his dynamic team of young tech geeks, who felt the need to give readers a better way to get recent tech news as well as in-depth feature articles.

TechGeek365 is conveniently divided into several different sections, so readers can easily choose the category that interests them the most or just fire up the site to see what the latest news is. Unlike so many technology websites today, TechGeek365 doesn’t just recite press releases without offering any added value whatsoever. Instead, their team of talented writers goes the extra mile and gives readers the big picture that’s otherwise so easy to miss.

If you don’t have time to read multiple news sources and would just like to get straight to the meat, TechGeek365 is definitely the best technology website in Lebanon that you can currently follow. 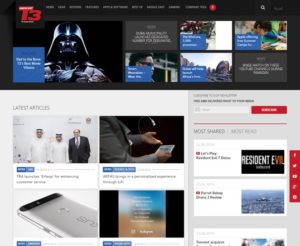 Even though T3 Middle East is based in Dubai, United Arab Emirates, their reach extends into the entire region, including Lebanon. Just like the original T3, T3 Middle East offers a good mixture of recent technology news and developments with a little bit of pop culture and science thrown in for a good measure.

One of the greatest strengths of the site has to be the level of access that comes with a budget of a large organization such as T3. Their reporters can get into places that would remain closed for journalists and reporters from lesser known sites. They can also get their hands on the newest gadgets through their exclusive partnerships with manufacturers of electronic gadgets.

The site itself is easy to navigate, but there seems to be quite a lack of community involvement. The place can, at times, feel rather bare and stellar, which is not something that you want to here if you are looking for a place full of like-minded individuals. Still, T3 Middle East is a great secondary source of tech news for people living in Lebanon and the rest of the Middle East. 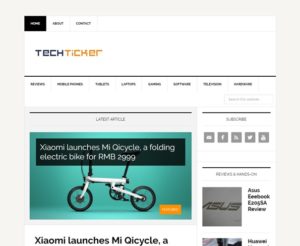 Tech Ticker started in 2004 as a blog that covers consumer electronic products, gadgets, and related scientific and technological advancements. Back then, it was just a small site powered by Google Blogger. It took Tech Ticker exactly 2 years to acquire its own domain. The website is currently headquartered in Beirut, Lebanon, where it’s being managed by the editor-in-chief, Anish Gangar.

Tech Ticker uses a very easy-to-navigate layout that looks great on screens of all sizes. The layout encourages visitors to return back to search for new articles and news stories. Those who would rather receive updates can do so via mail, RSS, Twitter, or Facebook. The site is still relatively young and not many people are actively commenting, but Tech Ticker’s team of writers is dedicated to their job and certainly don’t plan to slow down anytime soon. 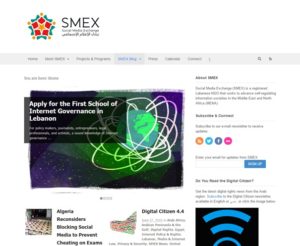 As described on the official website, “Social Media Exchange (SMEX) is a registered Lebanese NGO that works to advance self-regulating information societies in the Middle East and North Africa (MENA).” The organization was founded by Jessica Dheere, who currently focuses on content, leading the design and development of training programs and writing most SMEX guides.

Other members include Mohamad Najem, Coco Al Chamaliya, Jad Shokor, Kayssar Yaacoub, Mariam Al Shafie, and several others. Together, they work on media development programs as well as Internet policy research and digital rights advocacy in support of more accessible Internet access for civil society across the MENA region.

They also provide strategic Internet training to civil society actors and activists in Lebanon and have partnered with Women in Technology and the Collective for Research Training and Development Action to give training to everyone in need. Their goal of free and open, diverse and dynamic Arab Internet is one that every technology enthusiast should definitely