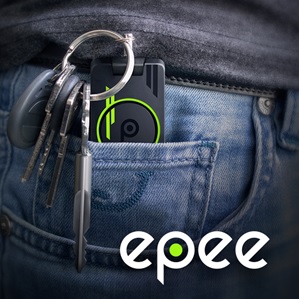 Haven’t we all wished for a miracle to happen at a time when we were threatened by an inevitable danger with no way out?

What man does not wish that his wife, child or close ones have a device, on which to rely each time when help is needed?

Epee Defender is an innovative device, which, according to its developer, is, in fact, a system, whose algorithms and technological solutions allow an escape from many potentially dangerous situations.

So, what are the features of the Epee Defender:

The developer is convinced that the device’s work algorithm is the most effective one, as it covers several directions at once.

Different work algorithms can be applied in various situations, through easy management using an additional button.

The Epee Defender size and shape resembles the ones of a quality key-ring. It is sufficiently small (5 cm long) and can be worn together with the keys, in your handbag, in your pocket, on your belt etc.

Due to its activation system, executed as a triggering pin, it may be used as a miniature defender for your house or car.

One of the most important Epee Defender features is the length of its functioning in standby mode. According to Musqogee Tech, the Epee Defender was developed so that it may be worn without recharge for as long as 365 days, which is basically one year.

The device’s features and technological gimmicks do not end here.

Musqogee is developing the informational system Epee Open Radar, which is an open-access map showing all occurrences of Epee Defender SOS Alerts.

The creator plans to develop a mobile app “Epee Watcher” for Android and iOS, which will enable keeping track in real-time of all cases of device activation. A Watcher may set its app to notify him/her of any occurrence in close proximity.

Musqogee started an Epee Defender campaign on Indiegogo.com to raise $55,000 in order to transition the device to the manufacturing level and give life to the project. Money raised will be used to round off the development of the technological features of the device and to organize mass production.

Musqogee tech positions Epee Defender as an irreplaceable life’s companion, which does not bother its owner in any way (it is compact, does not require recharging), but is able to come to his/her aid instantly, in case of:

The Musqogee Team is absolutely convinced of the usefulness of Epee Defender and that it will decrease the number of incidents the world over, due to its effectiveness.