TV IS ABOUT TO BE REBORN 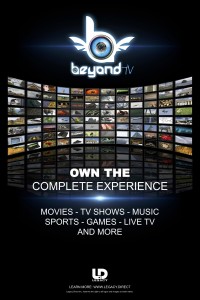 Legacy Direct is a new technology distribution company that are positioning themselves in front of the Internet TV and Streaming Media industry. Streaming Media is becoming a game changer for the video and audio industry. Companies like HULU, Amazon Prime, and Netflix allow users to cancel expensive cable tv accounts and choose what they want to watch at any given time via streaming media. Users are now getting access to their favorite songs on Youtube, Spotify, VEVO, Pandora Radio, and other similar services. Every day, users are turning to streaming media and cheaper subscription accounts, saying goodbye to cable television, expensive premium channel subscriptions, satellite radio, and physical CD or DVD purchases as a primary means of obtaining media. This is a trend and they are starting to add up in a big way. Because the percentage of households with a cable or satellite subscription is now declining for the first time in the history of television. More than 7 million Americans have already cut the cord.

Brothers, Christian and Jake Rosario, and a few partners know this is an opportunity of a lifetime. That’s why they started Legacy Direct. And the company’s first product they are launching is the BEYOND TV media player. The Beyond TV Media Player is a Compact Mini Set Top Computer. The Media Player transforms any television into a Smart TV. It is a simple Plug & Play system. Once you connect to the internet, the end user can now have access to thousands of FREE and or Subscription based applications such as Facebook, Instagram, Netflix, Hulu, HBO GO, Amazon Prime, Skype, Youtube, Etc.

This device also gives you access to the internet and you can browse your favorite websites. You can also connect wireless accessories like a key board and mouse. The Beyond TV media player is one of the best devices you can have in your home to do all your work and find entertainment all in one place.

So what does all of this means for those interested in the industry. The possibilities may be endless. We all want to leave a legacy for our families. But the right opportunity might come along once in a decade. And when it does, you have to know how to take advantage. That’s why the Rosario Brother’s are so proud of what the team put together here with Legacy Direct in a short period of time. Legacy Direct is in an evolving industry, they have an amazing products leading with the Beyond TV Media Player, they got leaders in place that are legends in the industry. They are about to go on the kind of epic run we only see once every 10 years or so. And it’s hard to disagree. Because you see it everywhere, the next revolution in television has only just begun. A recent Forbes magazine article headline: “The Death of Television”! With the Beyond TV… TV is about to be reborn. Once more people find out about Legacy Direct and the Beyond TV… the war for the living room will be what everyone’s talking about. Legacy Direct is in their pre launch stage and it would be a smart idea to position yourself to profit from the downfall of the cable companies before they go all-in with this breakthrough technology for your living room. Don’t risk missing out.

Visit www.Legacy.direct for more information and find out how you can capitalize on this growing industry or email [email protected]