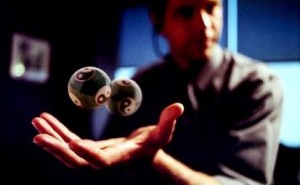 Dr. Tamas Lajtner has designed real objects that move with thoughts. Dr. Lajtner has spent the last 15 years researching the force of thoughts. The Lajtner Machines are based on the results of this research. Lajtner Machine will soon be produced and manufactured in the U.S., making the new endeavor a U.S.-based enterprise. More detailed information about the exciting new challenge of the Lajtner Machine can be found at http://www.lajtnermachine.com. where the host is Mr. Lajtner Jr.

There are more types of Lajtner Machine, four types will be put in the Box #1. What they have in common is that their thought-induced motion is visible with the naked eye. The Box 1 also contains software which – beyond motion – is capable of recognizing mental intentions (yes-no signals) in users who operates the Lajtner Machine. A camera (or a smart phone) records this motion.

As Dr. Lajtner has added, “The backers’ support in a crowdfunding campaign is much more than just money – especially in the case of Lajtner Machine. Let me highlight this! There is a funny object in the Box 1, its name is Bun G. The force of thought turns Bun G. You will learn soon it is not turning him that is difficult, but believing that you have caused it – with thoughts. Still, if there is no wind, and the stand has not moved, and you have not poked the figure with your finger, etc., then Bun G will not turn by himself. You moved it with your thoughts. Your thought has power. Saying this, the backers’ support is real power which fills us up.”

The Lajtner Machine uses the language that both living and inanimate recognize. This is the most ancient method of communication. On the other hand, Lajtner Machine is the first step in the future called Thought Technology.