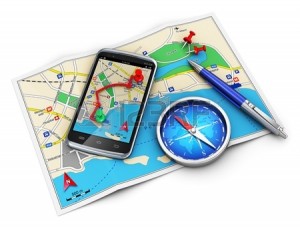 A GPS receiver is a great tool and I think one should be on every-one’s “must have” list for vehicle navigation.  This tool, like all tools, is only as good as the care it gets after purchase.

The day your GPS tracking receiver is manufactured and loaded with the necessary maps and waypoints, is the day it begins the slow, but certain path toward obsolescence.  Believe me, I speak from personal GPS experience.  I have used GPS both in a professional manner as a Land Surveyor, and recreationally, having purchased my first unit, a Garmin 12xl shortly after its introduction in 1998.

My wife and I along with two other couples have just returned from a 10 day trip to Washington DC, with the driving and vehicle provided by one of the other couples.  I offered use of my GPS, this one a Garmin 330c, but my friend said he also had a unit, a Magellan 770 which he would rather use since he was familiar with its operation.

We were on the road for two days, electing to chop the trip from Southwest Florida to Front Royal, Virginia into two manageable chunks.  Everything went well, with either the GPS indicating the correct route, or the route being marked so that the GPS was unnecessary.  The drive from our chateau (the time share’s term for a 2BR, 2B, with accommodations for 6) to Washington, DC, was entirely different.

The GPS was indicating turnoffs and entrances where none existed, and generally caused much loss of time, when traffic conditions prevented a lane change at the last moment to make a poorly marked ramp.  At that point, my friend indicated that he had purchased his GPS some years ago and had never upgraded the firmware, or the software (maps).  The unit was essentially useless, maybe even less than useless.

If you have on-board GPS Navigation, you should make sure that the maps are the most up-to-date available.  Driving with a well maintained tool is a pleasure.  Driving with an outmoded GPS which has received no care is a nightmare.

GPS in an Emergency

One of the newest GPS enabled products to hit the market is the 406 mHz Emergency beacon plus GPS receivers available for individuals to aid in their location in cases of imminent danger to life. Possible uss might be while hiking, traveling, or when working alone in remote areas.

These units are manufactured and sold by many companies, but perhaps the most well known is ACR Electronics. They manufacture two models. The ACR TerraFix 406I doesn’t have the built-in GPS receiver, but must instead be connected to an externl unit.
The ACR TerraFix 406I/O has a built-in GPS receiver which allows transmission of your exact location to orbiting satellites. At about $100.00 more, this is a logical choice.

The 406.0 MHz units transmit a strong signal that includes the unique serial number built into each device. The signals are monitored by a combination of satellites, including both the polar orbiting satellites of the COSPAS/ SARSAT system and geostationary satellites capable of retransmitting precise position information incorporated in the message transmitted by EPIRBS containing a GPS receiver or connected to an external GPS or Loran C navigator. An emergency signal from a 406 EPIRB is usually noted within a few minutes of being transmitted. The position of the EPIRB is normally known to within a few miles, greatly simplifying search and rescue efforts. The position of an EPIRB transmitting a GPS derived position is precisely known. In addition to the 406.0 MHz signal, the 406 EPIRB transmits a homing signal on 121.5 MHz for the purpose of guiding nearby search aircraft and vessels to the precise location of the beacon.

More information can be obtained from the government website which explains “How They Work“. You should keep in mind that these transmitters are for Emergency Use Only!