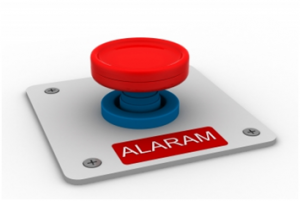 A wireless burglar alarm system is preferred by many households mainly because of two reasons, convenience and safety.

When compared to conventional burglar alarm system that uses wires, wireless alarm works based on radio waves. With this technology, you will have fewer worries as far as scars in your house walls and scattered wires are concerned within your home.

Using wireless alarms also results in savingsof your money which would otherwise spent on hiring an electrician for doing the wiring in case of a wired alarm. Wireless alarms are easy to install and by going through the installation guide, it’s usually a quick affair to set them up and running.

How a Wireless Burglar alarm Works

In humans, brain controls entire body’s operations. Similarly when humans invent any devices or equipment, they create a brain within them.

In the case of wireless alarm, the control panel is the brain of a wireless burglar alarm system.

Just like human brain which transmits signals to and receives signals from all other parts of our body, the control panel of the wireless alarm system handles signal movements and sends signals to system’s sensors which in turn produces an alarm sound.

The keypad functions as the heart of the wireless burglar alarm system. It is responsible for letting your system function or destabilize. The remote keys are alternative to keypads. Remote keys are normally used in long distance for the system to effectively function.

Few other parts of the wireless burglar alarm system which you should get familiar with are the magnetic contacts, contact sensors, cameras and monitoring devices.

Some wireless burglar alarm systemshave built-in contact sensors. Motions or excessive heat will be detected by thesetypes of sensors. Contact sensors are generally utilized where there isless chance for people to be present in a specific area in the home or in an office. Another add-on device in the system is the “monitoring service” which receives signals from the control panel.

In case when a thief enters your home and the system has detected it, an alarm will then alert you. The monitoring service will be the one responsible for calling emergency centers such as 911, a police station or even the hospital. Hence you are sure that during critical situation, an immediateassistance willbe offered to you.

Alarm systems can even consists of cameras as well for incorporating additional surveillance which can further enhance protection to your home.Having a video transmission through wireless signals can easily help you to identify who comes and go near your home or establishment.

Safety is always first and there should be no compromises made at all.Having adequate knowledge about home security devices such as a wireless burglar alarms will surely help you to pick up a good home security system for your house and provide utmost safety to yourself and your family deserves.

Although wireless burglar alarms are little expensive than a wireless doorbell, they pay themselves in the long run.