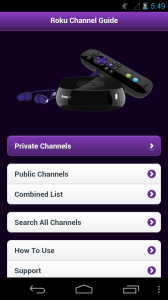 By connecting wirelessly to your high-speed Internet connection, Roku streaming players allow you to stream movies, television shows, and music to your TV sets. Roku players come with a Channel Store featuring a variety of channels, such as Netflix, Hulu, Amazon and many others.

Other private channels on Roku are a lot like public access television on cable TV, where ordinary people create and broadcast their own television programming. Some people create shows about their interests or lifestyles, while others simply broadcast images from their webcams. You’ll also find private channels, such as the curiously-named Nowhere TV, that package free content from a variety of high-quality providers.

According to the Roku website, 25 percent of all active Roku users have installed a private channel on their Roku players. Roku doesn’t carry an official list of these channels, nor does it review or approve of them. This suggests that they are becoming popular, but many Roku users don’t know about them.

If the Channel Store doesn’t have what you’re looking for, you may find it on a Roku private channel. For example, the Roku Channel Store doesn’t carry the Food Network or TV stations from Phoenix-area networks. By signing up for free online at Nowhere TV, my Roku now carries three Phoenix stations, the Food Network and a wide array of news, sports, entertainment, family, lifestyle, government, international, religious, and technology content.

Roku – Private Channel Guide has a large list of Roku private channels. You add them to your Roku player by simply clicking the icon or link for the channel you want to add. You’ll then be redirected to the Roku web site, where you sign in to your account and confirm your selection. Roku – Private Channel Guide also has the channel codes to enter into your Roku account online. Log in to your Roku account, click the Add A Private Channel link under Manage Account, enter the code, and click Add Channel. It may not show up right away on your Roku player, so be patient. You can find other channel codes by doing an Internet search for “Roku private channel list”.