Share
Tweet
You are here: Home › Computers › Why Your Company Needs To Enlist A Specialist IT Equipment Cleaning Service 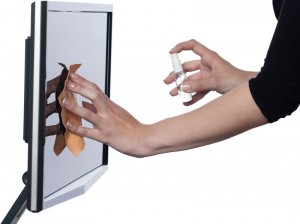 According to research conducted by Loughborough University, it has been calculated that throughout the working week, a typical office staff member will on average spend 5 hours and 41 minutes seated behind their desk daily.

Office staffs today depend upon desktop computers and IT equipment in order to be productive and meet their deadlines. The vast majority of office staff will dedicate most of the time sat behind their desk, utilizing devices such as mice, keyboards, telephones and monitors.

There is no doubting that modern IT equipment has greatly benefited the productivity and efficiency of the modern business world, allowing for office staff to produce and communicate like never before at an accelerated pace.

However as with most things in life, there is also a dark side to the many benefits computers and IT equipment has given us. The disadvantage I would like to focus on in this particular article is that of the effect IT equipment can have on the hygiene and well being of office staff.

Overtime IT equipment will inevitably acquire deposits of microbial viruses, by transmission from unclean hands of staff utilizing the equipment. The degree of viral contamination largely depends on the proliferation of the viruses within the office environment.

Based on research from the Swinbrune University of Technology, computer keyboards accumulate an increased quantity of microbial viruses if used by more than one person. Once a staff member contaminates a piece of IT equipment, the viruses residing on the contaminated equipment, can easily be contracted by other staff members.

This vicious cycle can cause widespread proliferation of viruses within the office, and exponentially increase the degree of contamination found in particular items of IT equipment, that have been infected several times with different types of viruses.

This comparatively makes the average toilet seem far more hygienic to sit at than the average desktop, which in total was found to contain an astounding 20,961 viruses per square inch. Further testing revealed that contaminated IT equipment can bear host to diverse variety of viruses including, hn1n, e-coli, hepatitis, norovirus, c-difficile, coliforms, staphylococcus aureus and enterobacteria.

These viruses pose a serious threat to the health and well being of staff members, who use IT equipment contaminated with such viruses every working day. Continued exposure to contaminated equipment, often leads to a high incidence of staff falling ill and becoming absent from work.

According to the Confederation of British Industry, the majority of staff absenteeism is attributable to illnesses such as a coughs, colds, flu and stress. All of which are illnesses that can be induced upon staff members due to IT equipment contaminated by viruses. The survey also found that the median cost for absenteeism related to such illnesses is approximately 760 pound per employee.

The most effective method of circumventing pathogenic contamination and thereby preventing harm to staff from occurring is to enlist the services of a professional IT cleaning service.

IT cleaning deploys specialist practitioners, to thoroughly sanitize and decontaminate equipment from harmful pathogens. Decontamination of infected computers and IT equipment prevents viruses spreading amongst staff members, which effectively reduces staff illness and the loss in profits absenteeism would ensue.

Ultimately hiring the services of IT cleaning professionals, should be high on the agenda of any company that cares for the well being of their employees, and is conscious of the high costs unhygienic desktop computers and IT equipment could bring to their company.

If you have read this article and want to learn more about the benefits a pc equipment cleaning service can bring for your company please visit our main web site.

Tags: IT Cleaning IT equipment Viruses