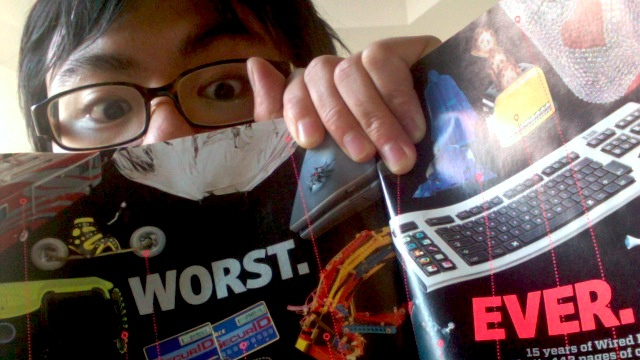 For many of us living in the digital area, gadgets provide our lifeblood—our everyday conveniences, our objects of adoration, and the items we get the most excited for. But several items this year have also proved that even the worst tech gadgets can do something else: Entertain. Here are five of the most hilariously terrible gadgets of 2012 so far.

The concept is simple: It’s an optical mouse, only it’s shaped like a woman’s torso and breasts. The Pat Says Now Body Mouse has been around for a while, but at CES 2012, the company unveiled a new iteration of the device. After all, a technological must-have like a boob mouse needs a feature update every so often. If you’re itching for a new update to the device before the 2013 model comes out, never fear: You can buy a variety of outfits to dress up your boobs.

And speaking of dressing up your boobs….

What’s that you say? A bra isn’t a gadget? Well it is if you put ice and a fan inside of it! While the notion of letting women cool down by putting ice right against their soon-to-be breast-cicles seems fool-proof, a few minor holes have been poked in the design. Like the possibility of holes being poked in the design, leaking frigid water all over the wearer’s clothing. Or the bright colors and fish tank design of the bra itself, which bleed right through most outerwear. Or the hypothermia.

But if you’re getting cold, you could always go for a run after lacing up your phone….

As a tribute to the games, Adidas commissioned a shoe phone—without even the good manners to call it a joke. Beyond the obvious benefits of having a phone right at your toe-tips, an LCD display on the side of the shoe showed texts and tweets that were sent to the device. The best moment of the unveiling was when the creator of the shoe said, without irony, “In 2016, every athlete might have a shoe like this.” Did he actually not realize that people have been making fun of this concept since at least the era of Get Smart?

For those who are frightened of toe-tweeting future, there’s always …

It looks like one of those phones that you see in old movies (you know—if you manage to realize that they’re phones and not bricks). Inside you’ll find a low-quality AM/FM radio, a bottom shelf MP3 player, and  well, that’s about it. Pretty much, it’s just a bulky, awful radio that tries to disguise itself as a bulky, awful phone.

But if you’re wanting to get more of a modern bang out of your music, you could just go with

That name isn’t made up. And it may also be serving as a warning label. Behringer’s iNuke Boom is an iPod dock priced at just 30 grand. It’s eight feet wide, weighs as much as my Aunt Matilda (i.e., 700 pounds), pumps out 10,000 watts, and packs enough decibel power to level a small city. Come to think of it, this “dock” may explain why 2012 is slated to be the year the world ends….

Sure, the year has had a few lackluster gadgets. But these devices prove that “disappointing” is just the shallow end of our potential for technological madness. The best part is, we still have plenty of time left for 2012 to flesh out its full showcase of terrible, bizarre, or simply insane gadgets.

Guest author: When Steven Chalmers isn’t reviewing teleconference services, you can find him covering the best topics in the technology industry.