Share
Tweet
You are here: Home › Tech News › IPad or a TV remote? Or is it both?

IPad or a TV remote? Or is it both? 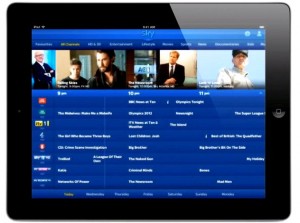 This is an article that talks about a new app introduced by SKY + that enables you to use your iPad like a remote control. The article talks about the many salient features of the app along with other things that SKY has been offering.

Arrgghhh! Those desperate times when you need the remote and it eludes you like the finest spies who have been trained for years. And you are left feeling like the helpless enemy. I can’t be alone on this. Admit it; you too have faced this situation.

So, I assume people high up on the Apple ladder, too, have faced this kind of a situation, and therefore have come up with a one of a kind solution. Sky + has launched an iPad app, which allows customers to transform their tablets to remote controls. I’d say this one is surely a blessing for Sky users.

Salient Features of the Sky+ app!

Sky has been at it, to provide a better experience to its users since it started off in the field of entertainment. It was one of the firsts to allow a recording function for programs being aired on the television. Later it came up with HDTV in order to ensure that people can get a great High Definition experience. 3D too has been offered by Sky to ensure supremacy in the field of television.

There used to be an initial charge for 3D viewing, however, during the Olympics, Sky knocked the charges away so that everyone who had the Hardware that facilitated 3D could be able to experience the Olympics. Post that they extended this “free Viewing” period by one week. Good Guy Sky!

There is no doubt about how Apple has been giving its full support in iPad apps development. There are a number of iPad app companies that are creating better and more useful applications every single day. These things are slowly yet steadily ensuring that the iPad becomes a necessity and not just a whim or a fancy for people. With the kind of advancements that the iPad has been making, more and more business owners are seeing how much they can gain by being able to successfully tap the potential of the iPad using community (which, by the way, is already colossal). If you are an entrepreneur, it wouldn’t be a bad idea to start contemplating an iPad app of your own! Until then, watch your television!