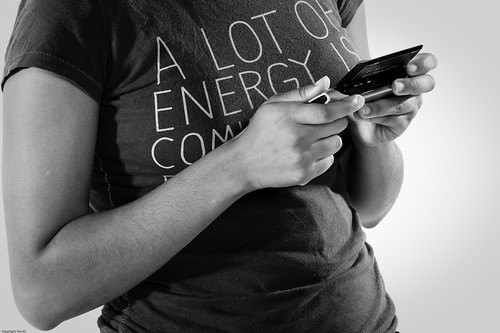 As cellphones become a more integral part of daily life for billions of individuals, the number of people who text while watching television continues to rise. People may text during commercial breaks to pass the time, or simply to multitask while a show is airing. Although it may not seem like a significant change, it is relevant because humans no longer place a great emphasis on the ability to focus for extended periods of time on a single thing, such as a television show or movie. Here are a few of the theories that can explain why people are spending more time texting while watching television.

One of the biggest reasons that people can be seen using their phones to text friends and family members is because of new societal conventions. In our modern society, we are expected to be in constant reach. Turning off your phone or ignoring a text, even when relaxing on the sofa after the end of a hard day, is now considered to be rude.

Another reason that you can see a marked increased in the amount of texting while watching television is because of the social interaction that it brings. Two people in different locations, who happen to be watching the same show, can interact with one another about the events of the show being aired. Two viewers might text back and forth about the drama on a new sitcom show, about a spectacular pass in a football game, or even about a certain outfit worn by a character in a movie. Being able to text back and forth is a way of interacting even if you can’t be together watching the show. It’s also less distracting to other viewers than if you were to have the same discussion over the telephone.

Many researchers believe that a big reason individuals are sending more texts while watching television is simply because the show is no longer enough to interest them for extended periods of time. With access to so many different types of technology throughout the day, individuals are accustomed to doing more than one thing at a time. Sending texts is a way to compensate for shorter attention spans in children and adults alike.

The largest majority of adults who text during television shows say that they do so simply to pass the time during the commercial breaks. Since a 60 minute show typically airs more than 16 minutes of commercials, there is usually plenty of time to send a text or make plans for the following day in between the show segments.

Overall, people are primarily using their phone to chat with friends, pass time during the commercial breaks, and remark on the events of the show itself. As people get increasingly accustomed to using their phones while watching television, it can only mean progress for interactive television.

Guest Author Pearl Harper blogs about mobile phone technology, including the latest trends in phone use and texting. You can find out more about the latest phone models, technology, and contracts at www.mobilephones.org.uk.