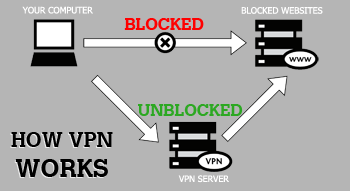 In the world of the internet, people can access all the websites, but the government of every country is cracking down many of the available websites due to some reason or the other. The websites are blocked by the government using an intricate technology that can perform the process of blocking in numerous ways. It can be done by identifying the domain names, removing of IP addresses, or specific keywords present in the URL are searched. In addition to the blocking systems and technology, the firewall prevents the users of the internet to access specific website from within a country.

Why Websites are Blocked?

Most of us do not know about blocked websites and we may wonder why websites need to be blocked. There are many reasons behind the fact that websites are being blocked by the governments of several countries. It is possible that at national level, some of the websites are considered black listed while others may be blocked due to the policy of the company. According to the policy of a nation, many websites are considered inappropriate for the people of the country and may prove to be a threat to their well-being. This is the reason that governments of many countries are taking action against those certain URLs.

Another reason of blocked websites by the countries is the religious concern and also that a lot of information is being exchanged on the internet that may not seem appropriate for the future of the country.

What Role does VPN Play?

The blocked websites may seem a daunting issue for many people in various countries that are interested in using those websites. However, it is still possible to access those websites that are blocked in your particular country. The internet censorship may be out of control in some countries that makes it necessary to have Virtual Private Network (VPN) for the people living in that country or traveling abroad. VPN allows access to the blocked websites by redirection using an encrypted server and you can steer around the restricted websites that are blocked by the government. It will not only allow the user to access the blocked websites, but also offer privacy and protection.

The internet users can gain access to a wide variety of websites by utilizing the encrypted networks of Virtual Private Network. VPN service allows the users that are accessing the internet to login and view the websites without any restrictions and limitations and enjoy the ability. Any personal or sensitive information, such as passwords or credit card numbers are protected with encryption of VPN service and it ensures that your online activities are not hindered by the government or other probing applications.

The users of VPN are not allowed to archive the history of their search since all the information of online activities is fully encrypted. If you are visiting any region that restricts the online access of some particular websites, VPN service can be extremely valuable for high level access and privacy protection.

Guest Author Tina is a guest blogger and technical writer. She has more than four years writing experience. She has the ability to write on any topic but she enjoys writing for VPN Ground. She recommends China VPN and UK VPN Service.