Who Is Using OpenStack?

Unsurprisingly, OpenStack installation base is major in the Western Europe and United States of America(USA), but this open source software has gained equal popularity in India and China as well especially in production installations. OpenStack is an open source cloud technology that controls large pools of storage, compute and network resources throughout a datacenter, all managed by a dashboard that allows administrators control while enabling their users to provision resources via a web interface. OpenStack is a flexible platform that ascendances your investments in the technology and shows additional sources of revenue with the existing customer base. OpenStack products and services offerings include: Public Cloud, On-Premise Private Cloud, Hosted Private Cloud, Converged Appliances, Training and Powering SaaS Apps & Marketplaces. Mindmajix Openstack training helps IT Professionals to understand what is openstack,components of Openstack and how to host the applicarions on Openstack cloud.

According to OpenStack Foundation Survey, in below pie chart major part of the OpenStack installations are prefered for private clouds, with a block of them in organization’s own data center and a block in a hosted environment by a third party. 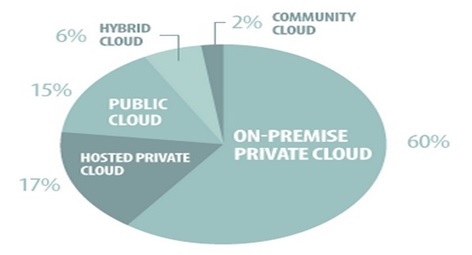 Installations on public cloud reaches to 15% and another 6% for hybrid clouds that include both private and public instances.

Enterprises in the IT segment are top deployers of OpenStack, which may not be a surprise. Research and academic institutions are next to IT, and next in the pipeline are telecommunication companies. All these constitute around 80% of OpenStack installations. Behind these are defense and government contractors, retailers, health care, manufacturers and financial and insurance services sector who are in trailing stage and contribute a less percentage in the OpenStack installation pool.

The top business drivers behind the adoption of OpenStack cited by those using it in production are saving money, by which we presume is meant not using VMware’s vCloud instead of OpenStack as well as making more efficient use of servers and storage that have been virtualized. Operational efficiency was cited as the number two reason for using OpenStack, in fact, but this always comes back to money. The fact that OpenStack is an open platform was the third most cited reason for choosing this cloud controller, and the fourth was the flexibility in choice for the technology underneath OpenStack. The ability to innovate and compete on top of OpenStack was another reason organizations say they chose this platform compared to alternatives from VMware, Microsoft, Citrix Systems, and others.

The number one use for OpenStack was as the foundation for web services applications, followed up by software quality assurance and testing. Running virtualized databases was the third most cited application running atop OpenStack, oddly enough, followed by basic research, then continuous integration and automated testing. Using OpenStack as a storage and backup platform was number six on the list, followed by virtual desktop infrastructure and then the mish-mash of data mining/Hadoop/big data. Putting OpenStack in charge of traditional HPC clusters rounded out the list. 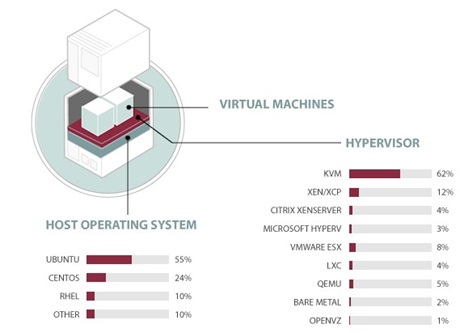 OpenStack supports a number of various virtual machines and hypervisors. The familiar operating systems deployed on OpenStack are CentOS clone of Redhat enterprise Linux, Ubuntu server distribution of Linux and currently KVM is a popular hypervisor.