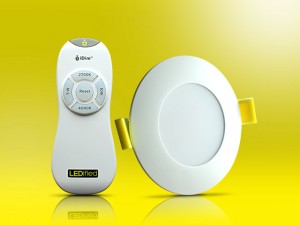 With so many lighting options one might wonder why downlights is popular.  Downlights is when a light source derives from a metal cylinder, mounted on or recessed into a ceiling that emits downwards directional lighting.  It is great for homes with ceiling imperfections, low ceilings or for lighting a room only partially.  But the era of downlights has given birth to a host of issues that are problematic such as the inefficiency of its energy use versus its light output, overheating to high temperatures which cause fires and short life spans which means a never ending requirement to change light bulbs. An Australian inventor hopes to change all that and more and has launched a Kickstarter campaign with the focus of attracting global consumers to the idea of its latest prized innovation EVAtm.

EVAtm by LEDified is a first of its kind downlight that tackles the issues surrounding efficiency, versatility and adaptability in which it allows users to change brightness and whites at the single click of a button. The developers utilize efficient smarts from pre-configured IR signals rather than WI-FI, to allow the iDim™ (patent pending) encoder in EVA™ to change its light output to what the user needs, whenever they need it.  It also uses a proprietary dual layer heat control system that incorporates a slimline aluminium plate and a fitting all in one.

“EVAtm was developed to tackle all of the issues surrounding inefficiencies in downlights and the available technology attempts made until now. We had to think outside the box to find the answer.” says CTO of LEDified and co-inventor of EVAtm, Matthew Ng.

Additionally, EVAtm  uses the latest in LED technology and has been tested and is suitable for use in many countries. EVAtm proves that downlights with the right LEDs and smarts can be versatile for homes as well as offices or even for use as a nice piece to add to any interior’s design.

The product is set to begin shipment to all parts of the world in the early parts of next year, but this can only happen once the main Kickstarter project goal of $100,000 is reached before the end of August 2014. Those who help back the project now will be guaranteed to receive their very own EVAtm ahead of the consumer market before the end of this year.