Apple CEO Steve Jobs kick-started the Worldwide Developers Conference 2010 in San Francisco with the announcement of next generation iPhone model – iPhone 4. After the infamous Gizmodo and Vietnamese showcase, Apple has stuck to its plans and announced the fourth generation iPhone model. The iPhone 3G is no more, just like iPhone (first generation) was killed and iPhone 3GS would be sold for $99 with two years contract.

Clad with wonderful new features, Apple will start selling iPhone 4 starting $199 with two years contract in US from June 24. The iPhone 4 would be available in 16GB version for $199 and 32GB version for $299. Before we start off with the iPhone 4, let’s get one thing straight about the operating system. Apple has renamed the iPhone OS 4.0 for iPad and iPhone/iPod Touch devices to iOS4. Coming June 21, the iOS4 upgrade would be available free for all devices.

The all new iPhone 4 is just 9.3mm thick and is 24 percent thinner than the iPhone 3GS. It’s pretty much similar to what we saw in the leaked photos that soared on the web. On the top, the iPhone 4 has 3.5mm headset jack, secondary Mic and the sleep-wake up button. At the bottom, the iPhone 4 sports primary Mic, speaker and Apple’s proprietary 30-pin connector port. Of course we have the volume controls on the sides.

Design-wise, Apple drops the rounded hinds design and adopts box like structure for the new iPhone 4 model. Apple has used stainless steel rims binding the iPhone 4 body, as a part of antenna system. It has integrated antennas and acts as a bonding agent to hold two glass panels on the front and the back of the iPhone 4. 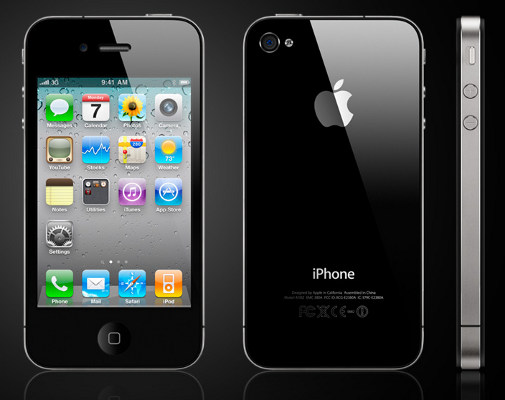 With the new iPhone 4, Apple debuts new display dubbed as ‘Retina Display’. This 3.5-inch multi-touch display offers 960×640 pixel resolution at 326 pixels per inch. This means crisper images and more amazing graphics display while playing games. Apart from that this IPS technology based panel will offer 800:1 contrast ratio that would be four times better than the previous generation iPhone devices.

So you can comfortably watch 720p HD movie on this 960×640 pixel display and with more accurate colors. Apart from that, both front display and back panel would come coated with fingerprint resistant oleophobic coating.

If you can recollect the mysterious Apple A4 System-on-Chip processor used in iPad, then you won’t be surprised to discover that Apple has used A4 processor. Yes, it’s the same processor that powers the iPad’s snazzy interface. Apple claims this chip to be power efficient and hence conserves power to add up to the battery life. 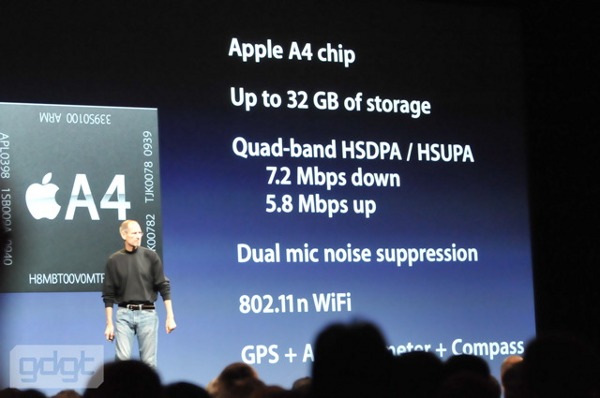 Apple has added 5 megapixel sensor with backside illuminated sensor and LED Flash. This new camera will also offer five times digital zoom and tap to focus options. Not only that, this 5 Megapixel camera sensor is capable of recording 720p HD video at 30 frames per second. The LED Flash will stay illuminated for recording better quality picture in videos. 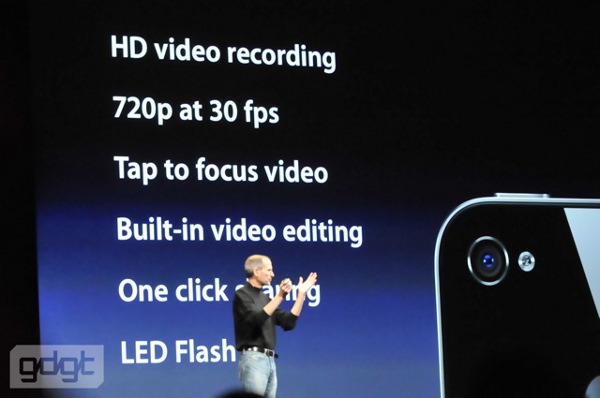 The iPhone 4 has front facing camera that enables video calling dubbed as FaceTime that works even when WiFi is turned off. No setup or installation is required as FaceTime works out of the box. Apple has build FaceTime using bunch of open standards like SIP (Session Initiation Protoco), H.264, AAC and so on.

Apple will also introduce new iMovie for iPhone app for video editing that will include options like scene transitions, themes, editable titles, and much more. This App will be available at a price of $5 after iOS4 is rolled out to everyone.

Will iPhone 4 turn out to be killer o Flip Mino HD and alikes? We’ll wait and see.

Apple has added three-axis gyroscope, a device maintaining orientation or measuring it based on the rotation mechanism of the object. In this case the iPhone 4 which is clubbed with Accelerometer to make it 6-axis motion sensing. Wow! Sony’s PlayStation 3’s game controller has gyroscopic motion sensing. It’s quite possible that in near future, we may see touchscreen apps supplementing the game controllers. 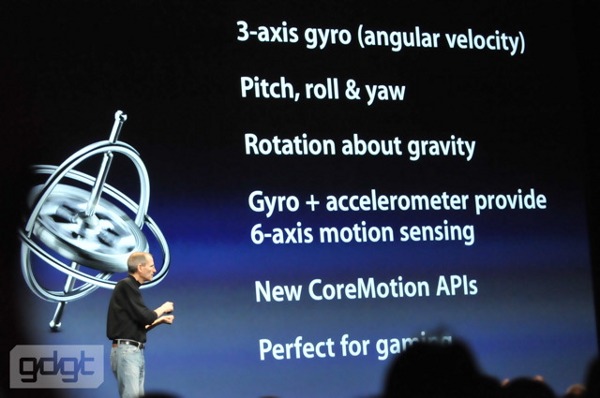 One of the major issues of all iPhone users has been the battery life and hence Apple has put a larger battery in the iPhone 4. The lithium-ion rechargeable battery promises to offer up to 7 hours of talk time on 3G networks while 14 hours of talk time on 2G Networks. Also one can listen to music for 40 hours or watch videos for up to 10 hours. Most amazing part is that users can now browser mobile web for up to 10 hours on the iPhone 4, that is as much as offered by new Intel Atom Pine Trail platform based netbooks.

Since Apple would be using outer rims as part of its antenna system, the company has come out with its own set of cases to protect the iPhone. Apple has introduced iPhone 4 protection cases dubbed as Bumpers that would be available in white, black, green, blue, orange and pink. Made out of moulded plastic and rubber, these cases are meant to keep the antenna system as well the glass panels safe.

-Micro SIM just like the ones used in iPad

Quite a lot of features like multi-tasking and folders utilities will arrive with iOS4 update but iPhone 4 will come preloaded with it. The iPhone 4 will require iTunes 9.2 so we can anticipate that iTunes software upgrade in coming weeks. Apple iPhone 4 will be available in white and black colors. Pre-orders begin June 15 and phones will start shipping on June 24 in the US France, Germany, UK and Japan. Apple will roll out iPhone 4 to 18 more countries in July, 24 more in August, and 40 more in September. So Let’s hope that UAE would be considered during August or at least September roll out of iPhone 4 device.

Here is the Video that apple made for iPhone 4.