Share
Tweet
You are here: Home › Mobile › 4 Ways You Can Keep Your Android Mobile Data Consumption In Check 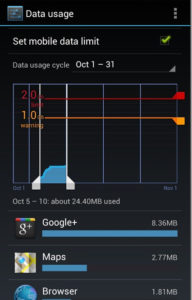 All mobile users, whether it is Android or anything else, will look to reduce their data usage so that they don’t end up paying for high internet usage. And for users of Android, there are several tricks you can use to manage your data consumption to your benefit. We will list four such tactics below.

If you use Chrome as your default browser on your Android phone, then you should use its data compression feature to cut down on data consumption. According to Google themselves, this feature alone will reduce data usage by half. In addition to this, browsing speed is also expected to be faster as a side effect. You can access this feature through the Settings option in Chrome.

Most users will have experience situations where a few apps in your smartphone updated themselves without even asking for your consent. And when this happens regularly with a lot of apps, then your data usage can skyrocket even though you might not be particularly keen on the apps being updated. To avoid this from happening, set the ‘Auto Update Apps’ option in your Google Play Store to ‘Auto Update Over WiFi Only’ option. By doing so, you will be notified every time an app is trying to use WiFi for updates, and prevent undesirable apps from consuming too much data.

Many apps can consume too much data even though you might not be currently using them. While this in itself is not a bad feature since it allows a few necessary apps to run perfectly, the problem starts when apps which you rarely use start consuming data on a constant basis. In fact, many apps do not even need to be constantly consuming data in order for you to use it. So, try to find out the apps that use too much background data and restrict their data consumption.

Streaming videos and music will also eat up a lot of your data. However, you can save a lot of data while streaming if you are smart. For example, if you are playing a song list from YouTube, and you are just hearing the music and not watching the video, then you should set the video quality as low as possible, say 144p. This will allow you to continue listening to the music while making sure that your phone does not unnecessarily consume data by running the video at higher resolutions like 720p or above.

You can also replace some of the existing apps with the latest ones that consume less data than usual. Check out submitcore.com for a list of some of the best apps for your Android phone.